Having won the final year prize for art at Hampstead Fine Arts College, Gigi spent a year studying Fine Art at Falmouth University, before attending Charles H. Cecil Studios in Florence, a traditional atelier where students are taught 'sight‑size' method, a portrait technique used by John Singer Sargent with origins in the practice of Titian, Van Dyck and Velázquez.

Gigi’s current work is heavily inspired by utilising a certain shade of blue prevalent on a late winter afternoon - Yves Klein and Derek Jarman’s static blue screen tones are historical references. Using this colour palette as her starting point, Gigi creates a particularly cold and still atmosphere in paint, which is subsequently contrasted by the warmth of a singular light source, either from a window or streetlight.

Alongside portraits painted to commission, Gigi’s recent series of ‘pet portraits' elevates this much-maligned genre to iconic status, emphasising each animal’s individual personality with a sharply focused silhouette, on a clean colour-block background.

Gigi has been inspired by collective memory focusing on found objects and fragments of letters. Drawing on personal history and photographic materials, Gigi presents universal themes of memory and nostalgia, working in both acrylic and oil, often incorporating unusual objects, archival or original handwritten letters, and eschewing the use of the traditional canvas in favour of otherwise obsolete discarded wood panels, book covers or record sleeves.

“I prefer using what is already available. It’s partially a form of sustainability, but I have also found the ability to paint on any surface frees me from traditional constraints of what art is, and what it should be.“

Gigi has produced several works based on her Bavarian heritage - winter landscapes which pay homage to this vintage genre in a clean, more contemporary style - swift, painterly impressions of snow covered mountain views, in small and large format.

Gigi continues to study part time at The Royal Drawing School, Shoreditch, and currently works from her studio in Hackney Wick, East London, producing paintings to commission as well as focussing on individual themes of memory, family history and belonging. 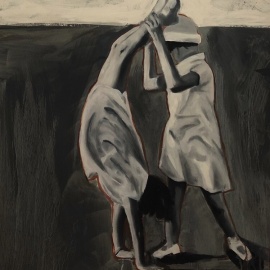 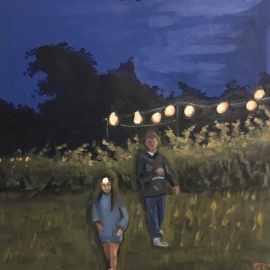 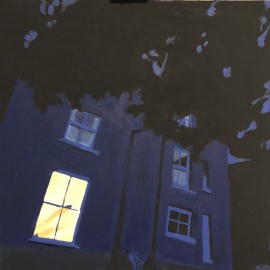 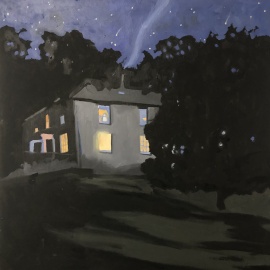