Tejiri Esewhaye Efemena, hails from Delta state Nigeria. Born in 1997, he studied Quantity Surveying at the University of Lagos. He is a self-taught expressive multimedia visual artist gifted with various styles of art; charcoal drawings, pen art, paintings, etc. His art covers a wide range of areas such as societal issues, life activities, the immediate environment, topical human stories as well as cultural diversity. He aims to always use his art to give hope to his audience and usher them into an artistic world of possibilities. He is a huge fan of colours, and as such a good number of his works usually contain a beautiful combination of vibrant colours. His works are also consistent in the use of figures that portray various emotions and stories formed because of personal experiences and happenings around him. He uses various styles of art in expressing his ideas such as painting, drawings and sketches, etc. He enjoys using acrylic paints, graphite pencils, charcoal, and colour pen in creating his works. He works on both paper and canvas but preferably on paper. He is influenced by the works of many artists among which include Nelson Makamo , Toyin Ojih Odutola, Arinze Stanley, Dennis Osadebe, Ken Nwadiogbu, Njideka Akunyili Crosby amongst others. Part of his creative process before he begins drawing or painting is to read extensively as much as he can about a certain idea or topic he wants to recreate and express. He also explores many pictures online that are in tandem with such ideas to give a solid pictorial view and/or representation of the idea. He sees creating art as a super power. He believes there is so much joy to be derived from creating something new that never existed before as every artist is a creator. Art without a doubt gives him room to express his thoughts and ideas the best ways that he can. 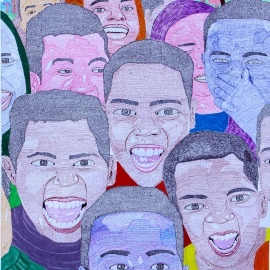 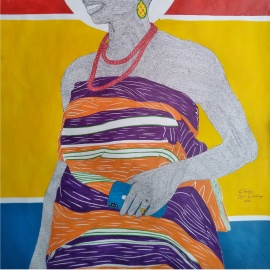 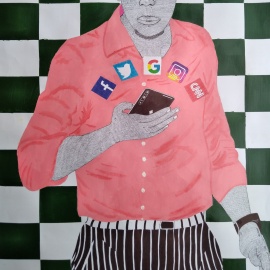 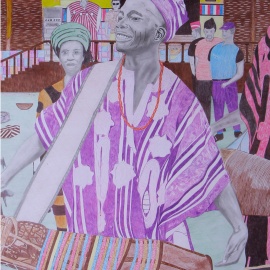