The setting for this exhibition is a fictional version of a small town called Dannevirke, originally derived from a small New Zealand town who’s inhabitants claim to be descendants of Danish Vikings. It’s an odd place, intended to be reminiscent of many isolated small towns around the world, dealing with similar issues of identity and making a living. In Le Fleming’s Dannevirke tho, the inhabitants have a strangely warped perception of how to engage and compete in the bigger world, perhaps due to a lack of (or over) exposure to outside influences, they see their predicament as having fewer solutions than most. Pulling on the wholesome country heart strings doesn’t wash with them, they see the only way to sell their products or services and to draw in the punters is to market their sexual exploits.

Found objects such as old tin cans are deliberately appropriated, logos and slogans are plagiarized, and all the extremities of hard and soft sells are explored in this tentative assault on the commercial world. By pairing up delicately groomed oil portraits with typographic arrangements, Le Fleming introduces us to his particular hybrid of the visual pun. Each piece has an inherent structure of components which work together in order to sell something, but by having overtly sexualised overtones, the spin is not quite the same as what may have been originally intended. In some instances it’s almost as if he deliberately contradicts for the sake of punctuating the silliness of a piece or to play on the comical connotations. What ever the case, be prepared to visit a world where ‘Sepu San the town Geisha’ is not exactly Japanese and the tapu underlying theme to ‘Extra Virgin’ olive oil isn’t brushed over, so to speak.

The Signature Art Prize 2022 is Open For Entries!
Read the post 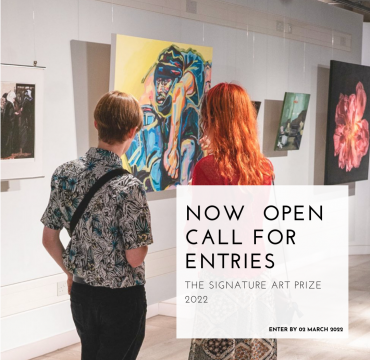