The work explores the broad subject of landscape painting.  There are subtle hints of human activity that suggest on-going conversations between people and nature.  People’s relationship with nature is implied as intrusive.  This is shown by the combination of man-made and natural elements in the work, which makes it more relatable to this human dominated environment.

The shapes and colours of the simplified structures and plants are so distinguishable that a viewer can instantly tell the specificities of the subject from the category.  A sunflower could never be mistaken for a daisy.  The unmistakable grey cloud shapes in Gerard Hemsworth’s ‘Weekender’ demonstrate this idea.  The colours used play on this, as they are artificial, and yet still adequately represent the natural subjects.

The work explores the concept of geometric accurateness.  The intricate, architectural structures in the paintings have a genuine presence, which suggests the work may be based on photographic source imagery.  However, this again is interjected by a personal element, which causes the subjects to sit unnaturally and uneasily on the canvasses.  Due to their positioning, it also looks like the images are attempting to maintain a façade.  This may be to hide something, and having chose the subjects and their positioning myself; this hidden information would be my own.

The work positions itself critically amongst artists like Patrick Caulfield and David Hockney – two artists who never took to their ‘Pop Artist’ labelling.  Similar to Caulfield’s paintings, the work explores themes of solitude and human absence (or at least a remnant of human presence).  As for Hockney, it is his landscapes in Los Angeles that are most informative.  There are matching explorations into remaining seemingly simple, but also including an abundance of personal information.

Although the paintings are made using oil paint, Hockney’s wet-on-dry acrylic process is very influential.  The canvases are coated with sections of neatly edged flat paint with a constant integrity to the edges, which makes each section equally interesting.  The tightness of the sections creates the illusion of acrylic layering, and raises questions about the work’s medium.

It also looks at different representations of the subjects.  The man-made subjects only have straight edges, and the natural ones have edges that curve and bend.  Caulfield assigns flat, plain colour to man-made subjects and more detailed brush and tonal work to natural forms.  This suggests an acknowledgement to nature, hinting that man-made objects will never be as intricate and technical as those created without a helping hand from man. 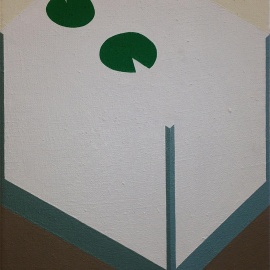 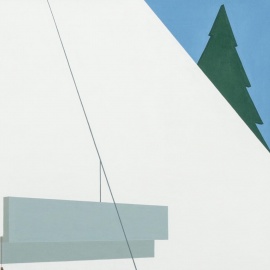 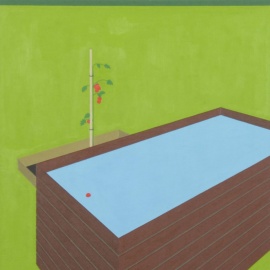 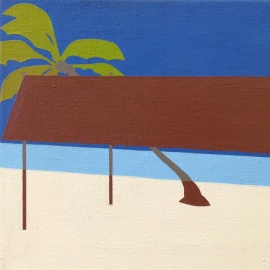 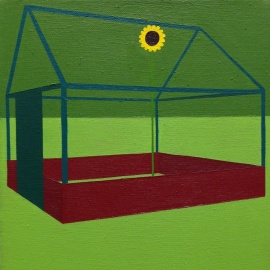 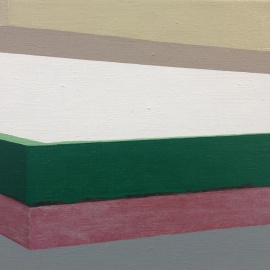 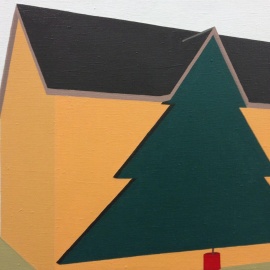